Maureen has been stalking this cat for a couple of months now.. I was coming late at night at first (1/2 in the am) she would leave food out for it but eventually the racoons found the feast and would clean the bowl before the cat got to it.. Result we trapped and disposed of a few racoons. But being racoon they kept on coming and broughts friends. that forced Maureen watch the food and chase the racoons away when they would come, but they got smart and would not leave.. Maureen vs Racoons they won.. So on to the next plan put food out at 6 pick up food at dusk.. Finally the cat figured it out but did not come regularly.. Well that is now resolved this is a picture with the cat hanging out with Maureen... I will post more later.. She has now earned the title Crazy Cat Lady 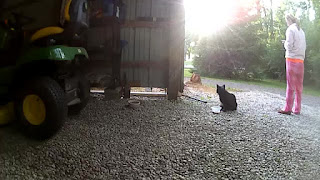 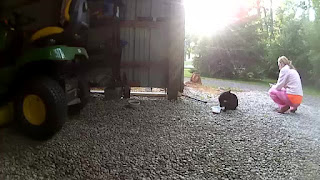 And a little Video